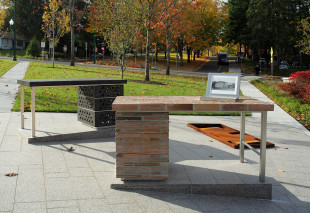 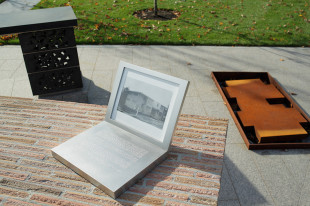 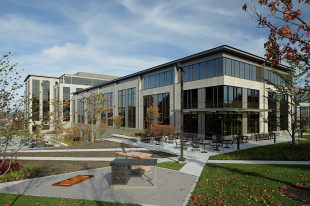 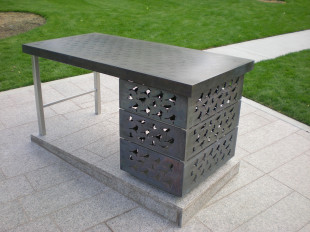 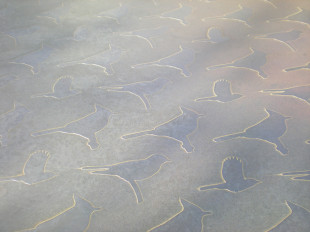 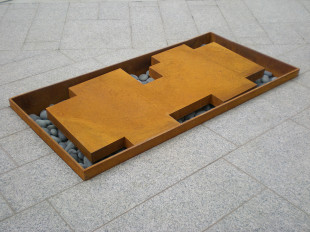 Home:Office brings the legendary JLARC building forward as a physical presence at the DIS (Wheeler) Site while honoring its history in the community.

Designed by local architect George L. Ekvall in 1949 as the Clow Apartments, the building was residential until the 1980’s, when it became offices for the State of Washington and by 1994, specifically for the State’s Joint Legislative Audit and Review Committee (JLARC) until its demolition in 2009.

Throughout, the building retained its residential flavor. Home:Office is expressive of the layers of meaning inherent to the conflation of domestic and business space over sixty years. The world of home and the world of office both contain desks. Informed by this idea are the larger than life Brick Desk and Bronze Desk sculptures. Part of the actual JLARC building has been incorporated: the Brick Desk is made from bricks salvaged prior to its demolition. On the desktop is a stainless steel Laptop incorporating didactic materials that provide a concise history of the JLARC building. The “screen” features a porcelain enamel black and white photo of the building taken in 1949, shortly after completion; its “keyboard” is an etched text panel.

The Bronze Desk features a repeating pattern of etched and cutout bird silhouettes, its regularity a reference to DIS data systems. These birds, the Steller’s Jay and the Horned Lark, are found in Washington State year-round. Together they symbolize the JLARC acronym. Illuminated from within, the cutout bird shapes glow at night.

The third sculpture at the Artwork Plaza is the steel JLARC Footprint, its form the first floor plan of the building. The natural rust finish of the steel references a local landmark: the orange-painted residence directly across the street from the former location of the building.

The Artwork Plaza is a primary element of Home:Office and the location of this group of sculptures, creating a focal point along major pathways linking the DIS campus and the adjoining neighborhood. Granite pavers in a running bond pattern reference the horizontal siding of nearby houses. Interspersed within the pattern are 16 square pavers symbolizing the makeup of the JLARC: eight Democrats and eight Republicans.

Home:Office creates a place at the new Department of Information Services campus for a meaningful neighborhood landmark to be remembered.