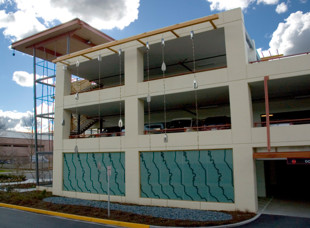 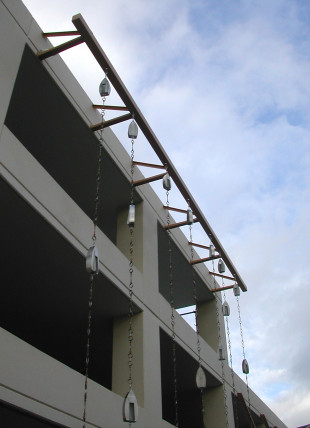 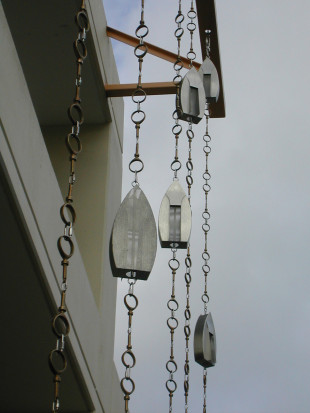 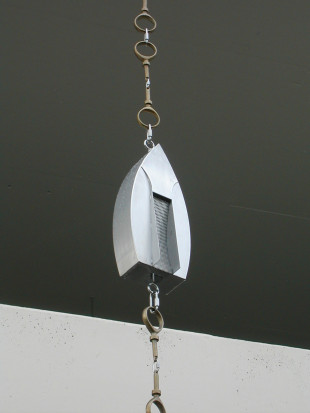 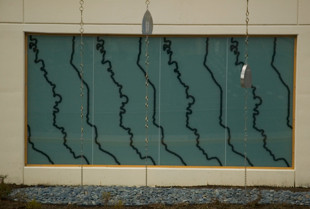 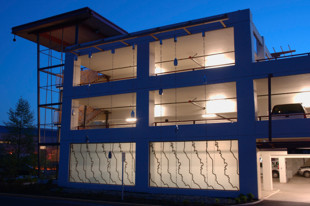 Image list
Info
Artist Team: Blue McRight, Lead Artist and
Warren Wagner, Architect
Project Title: River and Rain
Date Completed: 2005
Commissioned by: City of Redmond, Washington
Project Location: City Hall Garage, Redmond City Hall campus, Redmond, WARiver and Rain expresses the importance of water to the City of Redmond in an artwork linking Redmond’s culture and history while physically incorporating the City Hall Garage into the local hydrologic cycle of rain, aquifer, and river. Located adjacent to Well #4, a major source of city drinking water, the Garage is also near the Sammamish River. The same aquifer that supplies Well #4 also feeds the river. We have utilized the phenomena of river and rain to establish literal as well as metaphoric connections between the natural and urban worlds.

The river and its recreational aspects are significant factors in establishing a meaningful sense of place. We met with long time residents who told stories about annual boat races on the Sammamish with thousands of spectators.

Ideas about Sammamish River recreation are relevant now because Redmond is rediscovering the river – present day Riverwalk users are taking on stewardship of the natural riparian environment. By referring to its history and use we seek to conceptually and physically connect river to city, past to present.

River and Rain consists of seven large-scale sculptural rain chains that connect the top of the Garage to the ground. Each is a series of bronze oarlocks and boat shapes linked together. Oarlocks were chosen not only to represent river travel; they also symbolize the importance of technology to Redmond (home of Microsoft) in that their shape can be read as both “0” and “1” – the foundation of computer codes. The chains are connected to a header that collects rainwater from the roof of the garage stair tower. Stainless steel boat forms are placed at the top of and along each chain, the overall effect being one of implied motion, as if a race is taking place on the Garage façade. Frequent rain adds a kinetic dimension as it cascades down the length of the sculpture chains to disappear into a bed of river stones and percolate through to the aquifer below.

References to modes of river transportation enhance the program of the Garage as a transportation facility. But seeing the shape and history of the river itself is also important. On the ground level, a series of laminated glass panels displays a graphic pattern of alternating shapes, showing the original course of the Sammamish and the present course after being straightened by the Army Corps of Engineers. These panels are illuminated at night by headlights of cars in the Garage. Thus the shape of the river becomes part of the Garage, identifying the site and further connecting river and city, viewer and place.